Personal Blog
22nd January - 29th January
As Helen Keller (1968) stated, life is either an adventure or nothing. Through our experiences in life we begin to realise that life is what you make it. The opportunity to apply for the Erasmus programme came up and I felt this would be a great way to step out of my comfort zone, step away from the people and surroundings I am familiar with and grasp hold of a once in a lifetime experience to spend time studying in another country. Since applying for Erasmus I feel time has passed so quickly and in a way it still feels somewhat surreal that this is it, I sit in my room in Nijmegen writing this blog, the place where I will make my home for the next four months. 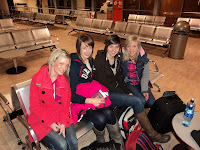 Leaving home was probably the hardest part of the journey so far but after all the goodbyes Christine, Gail, Kirsty and I set off to catch our 7.00am plane to Amsterdam. We took the train from the airport to Nijmegen and here all information we had heard about the Netherlands became apparent. We were able to see that it is continuous flat land with green fields like home, many windmills and weather that looked damp and wet. In some ways I felt a sense of relief as we were not going to a destination that was completely foreign, the weather we are certainly used to.
The university had organised for someone to pick us up at the train station and take us to our accommodation. I was taken by surprise as we walked outside, there wasn’t a car park but a ‘bicycle park’ with hundreds of bicycles. This is part of Dutch life and I now have my own bicycle. It seems like a really cost effective method of transport with the added bonus of getting some exercise. 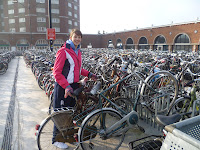 Our accommodation is lovely, we all have our own rooms and it reminds me of student halls in Stranmillis. There are shops close to the halls and it hasn’t been a huge culture shock as there is a Lidl store and most food that we are used to at home is available in any of the shops.


Everyone has been friendly and helpful, they soon realise we have no Dutch and speak to us in  English. Although there have been a few interesting experiences with bus drivers who became frustrated when we didn’t pronounce names of places the way they’re used to but we took it with a pinch of salt and tried to be as polite as possible. I have been amazed at how fluent both the Dutch and the Erasmus class have been in speaking English, it makes me eager to make a real effort to learn the Dutch language while I am here.
The university organised an extensive introduction programme for our Erasmus class during the first week. As I look back I’m glad we were part of this and did not just start straight into class. During this time we were able to get to know the other Erasmus students, find out about university life, explore Nijmegen and experience some Dutch culture.  Most of the time at home I spend time in the company of familiar people but this was a time when I had to make a real effort to get to know others. Already I can say everybody in our class is lovely and I look forward to studying alongside and learning from them. Some have already asked did we really come on an Erasmus experience considering there are nearly 14 students from the United Kingdom! 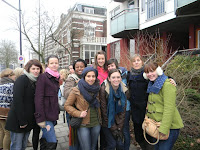 After only a week I can say I have learned so much about myself, about the Dutch culture and about others. There has been so much happening that I haven’t had time to think about home which in my eyes has been quite an achievement. I look forward to the next four months with anticipation. Thoreau (1862) once said we should come home from adventures, perils and discoveries everyday with new experiences and character. I feel this is a time when not only will I gain experience but also learn a lot about myself.  As a Christian I believe I am here in the Netherlands as part of God’s plan for my life. I will face all challenges and trials with courage knowing He is in control. It has been a great first week and I look forward to starting class next week.